This blog is dedicated to the Cinta Senese Breed of pigs, and to the Casamonti estate, which raises them and produces the typical pork products so famous to Tuscan tradition.

Tours and lunches are offered there daily, on appointment, for all who are interested in spending a few hours tasting products typical to the Chianti Classico and to Tuscany, while each product and wine is explained to you. 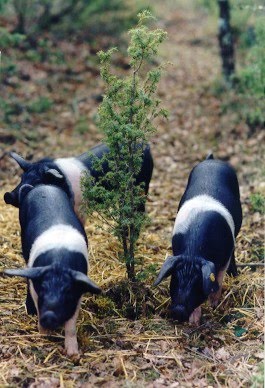 Few people, outside of Tuscany, actually know much about the Cinta Senese breed of pigs that was at the top of the list of endangered and "residual" species at risk of total extinction in the 1990’s, so we will give you a brief introduction.

The Cinta Senese breed owes its name to its black coat with a white sash (called a cinta in italian) that runs across its shoulders, sides and front legs. Medium in size (adult pigs run between 160-200 kgs in weight), it has sturdy limbs, long ears that cover and protect its eyes from branches and a long snout with a very thick grout that allows it to dig in the dirt at ease. These characteristics allow it to live as a free range animal in the woodlands of Tuscany.

The breed is native to this region and dates back probably prior to the middle ages. A cinta pig is depicted in the fresco by Ambrogio Lorenzetti dating back to 1337 (called the “Buon Governo” – see the photograph) in the Palazzo Comunale in Siena’s Piazza del Campo. It was a popular farm animal probably due to its heartiness and easy adaptability to all types of areas.

This breed is now off the endangered species list and its meat was awarded the DOP classification from the european community as a product of high quality tightly tied to tradition and is now listed among those culinary excellencies that render tuscany and italy so famous around the world.

The DOP is reserved to the meat obtained from animals of pure Cinta Senese breed with certified origins that can only be raised in Tuscany and must be free range and fed with a combination of natural grazing and pelletted cereals that are guaranteed as free from all genetic modifications. The piglets are certified just after birth and provided with an ear tag that lists their genetic background.

The fresh meats they provide are transformed into those products that are typical of Tuscan tradition, and they all carry a plastic band that certifies the product’s origin by the consortium that controls the genetic heritage of the animals. This band allows you to trace the final product all the way back to the original animal it was produced from.

Casamonti’s Cinte Senesi are bred free range in the woodlands and their daily diet is integrated with specially formulated cereal mixtures that vary according to their stages of development, although, truth be said, they prefer digging for a root or eating a wild mushroom to the easy food provided for them.

When they reach two years of age, they are taken to the butchery and then the meat is transformed directly in the estate salumificio (laboratory) into the typical Tuscan products that include salami, finocchiona, fresh sausage, seasoned pork loin, salt bacon, capocollo, cured lard, and the famous prosciutto.

The products are cured in special rooms according to the length of time it takes them to be ready for consumption. This is a totally natural process, and in the case of the prosciutto, for example, can last well more than two years.

I, Raymond, was one of the founding fathers and later president of the Consortium that protects the genetic heritage of the Cinta Senese breed. The Consortium was created to save the race and to promote and guarantee the origin and distribution of the products obtained from this spectacular breed of animals. The Consortium applies the most stringent breeding rules than any other similar organization in Europe.

Casamonti, thanks to the high quality standards of its products, is quoted among the top best in Tuscany and has won various awards and recognitions and boasts fans and clients from across the world. 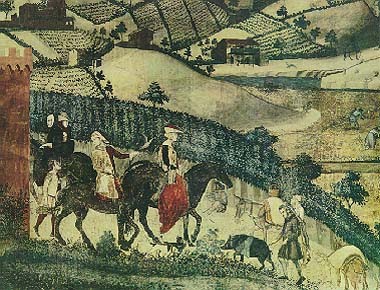 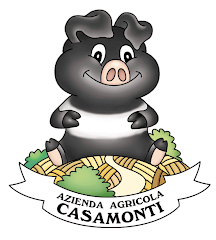 Raymond
Castellina in Chianti, Siena, Italy
I live in the heart of the Chianti Classico Region of Tuscany, in Italy. I dedicate my time to running a farming estate producing Chianti Classico wine, Extravirgin Olive Oil, and raising the rare Cinta Senese pigs. We are among those that helped save this race from extinction. Today we are the largest breeder in the Siena area and we produce and age the traditional Tuscan products: prosciutto, salami, finocchiona - all certified by the Protected Denomination of Origin, Cinta Senese DOP. We hold tastings of our products during the week: you can book a visit by writing to tuscanray@gmail.com. If you enjoy the products, you can purchase them from our shop. They will be shipped "door to door" anywhere in the world. We have an international clientele, with American and European fans of our wines, oil and pork products. We are also Tour Operators with a travel agency in Castellina in Chianti specialized in holiday rentals of Villas, farmhouses and residences in Tuscany, Umbria, Lazio and Piedmont. Website and blog are at www.tuscanenterprises.com

Our other websites and blogs.